A downloadable game for Windows, macOS, and Linux

A series of contrived and incredibly stupid accidents lead to Tabithia Knight (Tabby) and her friends Trixie and Nikita ending up trapped inside a barrow! When a dark presence reveals itself it is up to Tabby to get her friends out of there alive!

This story follows on from the events of The Testimony of Trixie Glimmer Smith (https://digital-poppy.itch.io/trixie), but should still be enjoyable as a standalone adventure!

Three Lesbians in a Barrow is around 2 - 3 hours long, if you want to play all the content.

Uncover the Past, Dig Through Rubble and Procrastinate:

Three Lesbians in a Barrow contains  descriptions of violence, horror and some bad language.

* One lesbian, one bisexual and an academic with lesbian characteristics

In order to download this game you must purchase it at or above the minimum price of $3.99 USD. You will get access to the following files:

I certainly enjoyed playing this game, although it may not be a long game, but it definitely offered some intriguing story, characters, multiple choices, different endings and some good humor.

Well done to everyone who made this game, especially "Digital Poppy".

I'm glad you enjoyed the game! Thank you for your kind words ^^

I just got through this and had a lot of fun with it! (No spoilers in this review, so don't hesitate to read it)

When I discovered the previous game, "The Testimony of Trixie Glimmer Smith", I was really surprised at just how much it hooked me. After my first playthrough I knew I wanted to go back and see the other paths the game offered, and even got to the point where I was trying things just to see the minor alterations they'd have on the game's ending, so seeing a new VN from Digital Poppy, I knew I'd be playing it immediately.

Though still being a horror-themed VN and starring two of the previous title's characters, the tone on this one felt different! The horror (mostly) played a backseat to just letting the characters interact with each other, and I found myself laughing at a lot of the game's lines. "Trixie" had its humor, but it felt like comic relief to its more pressing plot. "Barrow" seems to be much more willing to just try to be funny, and does a great job of it, even if the situation is more dire. (Even without a supernatural horror, the characters do have to deal with potentially being trapped in the barrow and not being able to get out!)

In "Barrow", you get to play as the new character, a transwoman fox named Tabby. She's a very fun character and I couldn't help but pick all the happy/positive/shippy choices whenever they were presented. She gets to play the role of mediator to Trixie and Nikita who have a very aggressive relationship with each other. The description says that you don't need to play the previous game to enjoy "Barrow", but I would highly suggest doing so myself, as it makes their dynamic a lot more understandable when you know what they went through in the previous game instead of just being told something happened last summer and to drop it. At the same time, Tabby does get to try and learn a bit about them and if you yourself are a blank slate you'll be able to pick up on some of it, if not the specifics.

Also I am extremely jealous of her dress. Though it is perhaps not the best outfit to be wearing on an outing to some weird old barrow.

"Barrow" builds on "Trixie" in terms of interactivity by turning the game into a series of limited choices. This was explored a little in a library scene in "Trixie", where reading books passed X hours and you only had so much time to get the relevant lore, but here it's the main conceit of the game. This time the lore is there but you can only read so much of it before having to work on other things. There's still plenty of old forgotten tales to be read of wars with abominations and magic spells to banish evil, but this time the player has to keep it in their own mind at the end where they need to demonstrate they've been paying attention (and hopefully got all the information needed).

At the time of writing, I've only done a single playthrough. "Trixie" was a very similar game with most of its prompts leading to the same results other than a decision of which character to spend time with, which made subsequent playthroughs a lot of mashing clicking to get to this main split. (Of course, you could just save before making any choices...) "Barrow" is structured in a way that I feel like when I get around to my next run that the differences should happen a lot faster.

As a whole, it feels more compressed than the previous game. It took me a little over 2 hours to get through, but not for lack of content. It's a quicker pace and is able to get to those decisions a lot faster given the context that the game takes place with the characters trapped together so there's no need to talk about what to snack on at a bakery or who to text about the day's events. It's just three lesbians in a barrow after all. It was a very fun two hours, and I'd definitely recommend it (and "Trixie") to anybody who wants a story focused around LGBT characters that isn't a romance.

Tabby isn't great at dressing appropriately. Thank you for the kind words! 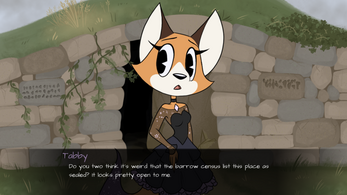 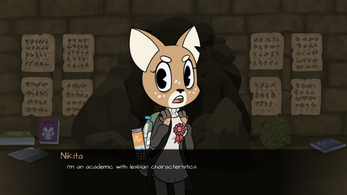 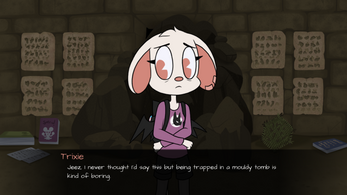 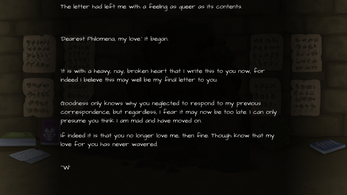 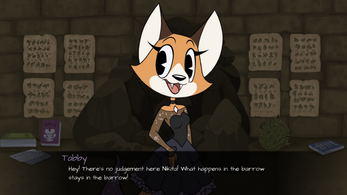