This postmortem predictably contains a few spoilers for 'The Testimony of Trixie Glimmer Smith'! If you haven't played it there's a free demo on it's page! Give it a try!

'The Testimony of Trixie Glimmer Smith' released about 50 days ago, so I thought I'd write a short reflection on it, given that it was my first big release!

When writing Trixie I had a few main goals I wanted to meet:

An issue I have always had with visual novels is that they can be a slog to replay, since you already know most of the story. I chose to make Trixie an unreliable narrator, she second guesses herself a lot and the sanity system means Trixie's interpretation of events can change drastically in different playthroughs . I hoped for players to be able to try and piece together what actually happened to Trixie through multiple playthroughs, working out what was real and what was a figment of her imagination. Based on the feedback I have gotten this seemed to be successful, so I would defiantly like to experiment with alternate storytelling techniques again in future.

This decision was also inspired by 'The Repearer of Reputations', a fantastic piece of 1895 horror literature by Robert W. Chambers. The story is written from the point of view of an unreliable narrator. The reader may not pick up on this at first though, and it only becomes exceedingly obvious quite how detached from reality the narrator is with multiple readings picking out little details. Trixie is far less extreme however, in the interest of telling a more comedic story.

Parsnip was set entirely on one lane, and told through the perspective of Parsnip who... well... 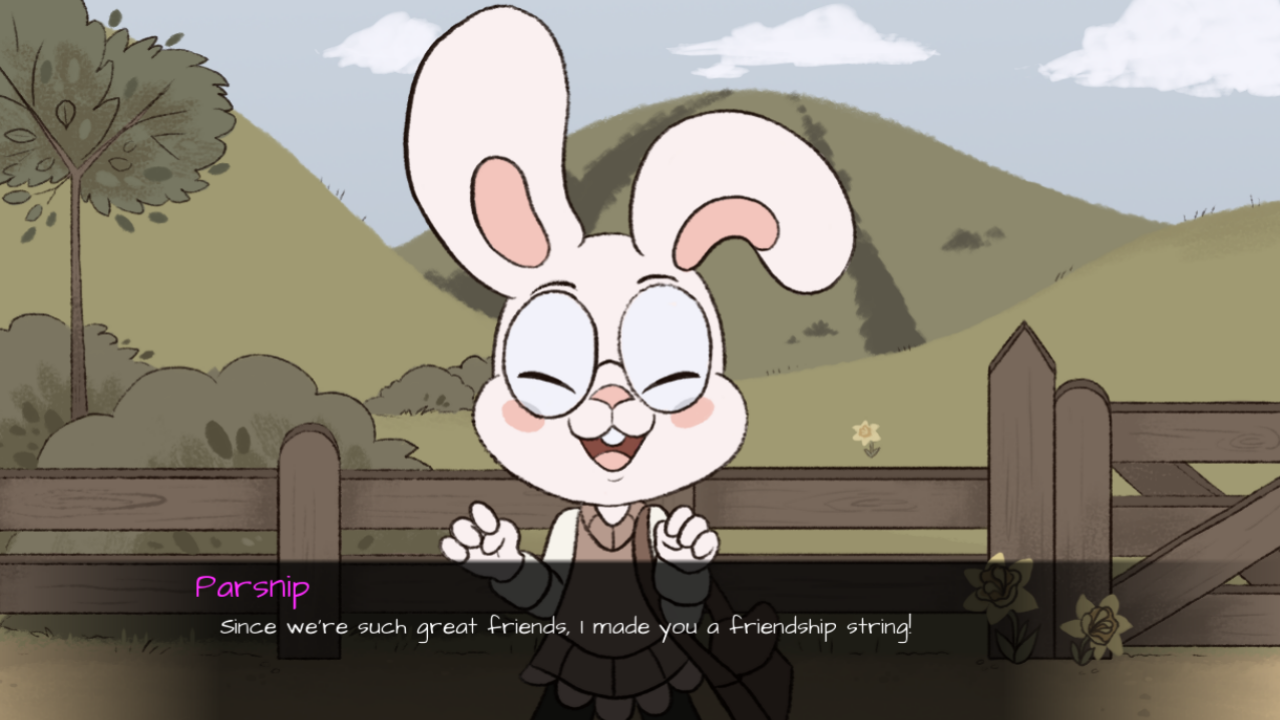 ...doesn't really know much about anything. Trixie already knows plenty of history and mythology, it's what she is studying! She also gets out and about, travelling around the Bluehills area during her story. Bells route in particular aimed to take Trixie across the county and explore a few smaller stories, rather than have one main plot thread.

Trixie also contains a bunch of 'lore books' with some historical trivia, some of which even helps Trixie on her mission to stop Nikita. These books were inspired by the 'Library Use' skill in the Call of Cthulhu RPG, a mechanic I really like. They give the player a chance to learn about the world and try to work out what is an isn't relevant, and even what is and isn't real. 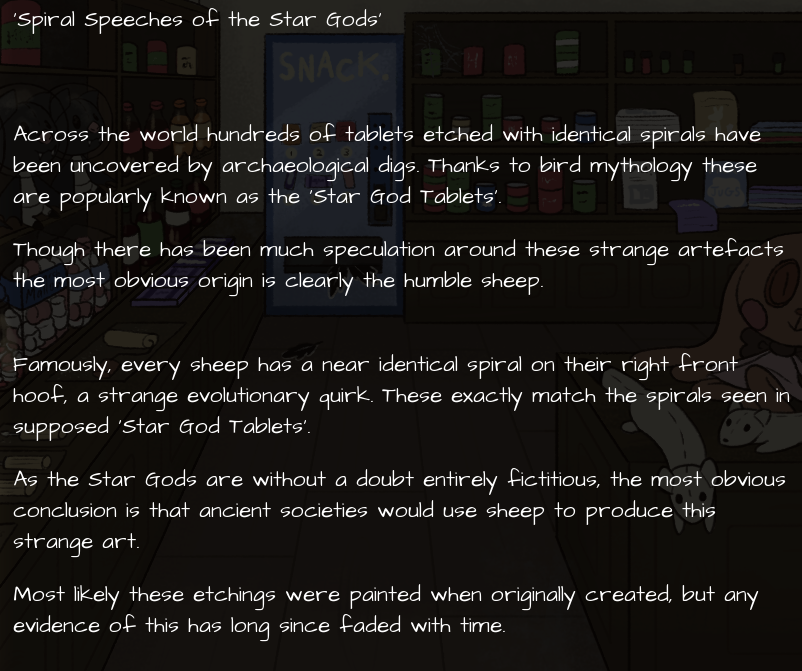 Little details in conversations and books were intended to make the world feel like it had some history already, both outside the main story and regarding some of the strange things encountered in the game.

The games three routes also intertwine at some points, which was also intended to have the player want to know the full picture. I hoped for this to make it seem like Trixie wasn't the main character of a story centring on her, but a normal rat in a busy world that carry's on with or without her. She is nothing.

I like writing queer cosmic horror for two main reasons.

I'm glad to say that Trixie has a very diverse LGBTQ cast. Bells route in particular explores a lot of feelings I have (or had) early in my transition.

Is The Game Funny

Humour is entirely subjective but yes it is one of the funniest games maybe ever.

The initial draft of Trixie included several 'investigation' sequences, where the player was able to click on specific parts of the background in search of clues. Most noticeably the abandoned cottage would contain an extensive investigation. The player could also collect clues and items and look at them in their inventory. As the game became a more linear experience these features lost their importance, and were eventually cut entirely, so that more time could be put into writing.

There were a couple of short 'action' scenes in the game. In retrospect I feel this was a mistake. I generally avoid writing action since I suck at it and these scenes ended up feeling a little stilted. The lack of specialised art for them also didn't help, since there was little to show visually, making the action surprisingly boring. I feel my writing works best with character dialogue and atmosphere, rather than violence.

There were a few character arcs that I feel could have been better developed, if I had a longer development time.

The Matted Figure for example, never got as much detail as they should. What is their long term plan? Why were they a ghost? (This should be answered in a short VN I'm hoping to release for free at some point in the next few months!) This is largely due to their character being an amalgamation of two characters in the original draft which was changed fairly late in production leading to their arc being rushed.

Bells route ends with Bell flat out refusing to talk about some of her issues Trixie had been asking about. While this is a little disappointing, I do think it makes her feel more like a real person. I know I wouldn't tell someone I have only known a week about my pre transition feelings, and it's good that Trixie respected that in the end.

The Magpie is never really seen in game which makes them mysterious, but I feel they could have been cut altogether, they don't really add anything to the story in its final form and just feel underdeveloped or like a red herring.

The insight system worked pretty well, I spent a lot of time ensuring it was unlikely to shoehorn the player down a specific path randomly, while still causing unexpected changes in the story. (QA testing on this was a nightmare)

The games art and music was fantastic, I can't take any credit for that though! Check the artists out here! https://twitter.com/RT_Animation https://soundcloud.com/d-eastes

The music was written so that it could seamlessly fade in and out of different characters themes, with each character having their own instrument playing the same tune, this worked really well and keeps everyone feelings unique.

Trixie might not be a perfect game, but it's my game and I love it all the same. 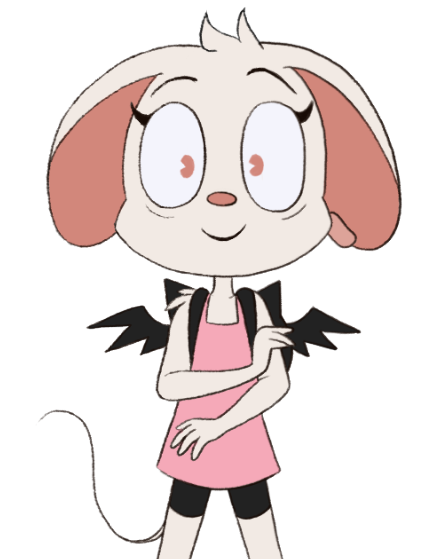 If you haven't played Trixie you should erase any spoilers you just read with brain worms and go play it! I dare you!

Get The Testimony of Trixie Glimmer Smith

The Testimony of Trixie Glimmer Smith

I absolutely loved this game! The lore was really detailed and thought out and I found myself so interested in learning more about this world. The characters were also refreshingly fleshed out and felt real instead of just generic cliches. I also loved the comedy as well. I usually don't find most games funny since the humor tends to be kinda stupid or crappy but this was actually genuinely funny. I really hope to see more from you guys and I definitely want to buy your other games now when I'm able. I think you guys are my favorite game developers right now. I hope you do more visual novels set in this world with these characters again.

Not often do I get so hooked with games or experiences, this one got me really interested since the beginning, it was real, it was honest, it was humble, and it is art. To a personal level I felt Trixie's feelings for I also think I don't quite fit and it's too late to do something. After playing it many times I got really interested and am currently knowing more about the many writers revolving around the King in Yellow, about small british towns and common terms and ways to mingle and customs, about hrt and transition and how it feels, and about living as a nerdy person in such a world as today's. Thank you very much

One thing that made me replay -more- was seeing which items were relevant to the ending. Won't say my findings, spoilers!
Also that some times the cottage IS the place between the stones, and sometimes it's not... quite interesting~

I looked hard in this game for differences between playthroughs. Once Heidi said she wanted me to go to her store at three, but then she said five. That made me try to pay attention even more. I was always looking at the stuff in Trixie's room to see if it changed, but I should probably pay more attention to other things. Today I got the change where the scissors were a knife. I got the bad ending twice, both times getting stabbed by crazy scissors, but finally somehow managed to get the good ending (I think) where Trixie doesn't write her report all over the walls. Seems pretty good to me.

I love researching in the library, because it really did help. Nice to see that you can make it through by learning things.

I like Gregg but their route scared me...I never thought alchemy would be involved. Though I did think that his route maybe would be scarier somehow. I was freaked out for a while in Bell's route when the antler deer god looked at me.

But most of all I wish I could tell Trixie that she's an honorary girl.

Also, sorry if I got some pronouns wrong. Trixie said she was worried about not being or feeling like a real girl so I think she wants 'she' and 'her' but I could be wrong.